Northampton Saints were beaten by Wasps at Franklin’s Gardens for the first time in almost ten years.

Dan Robson, the scrum-half, scored Wasps’ very first try when he managed to find an opening and touched down on the post before Rob Miller passed from close in. 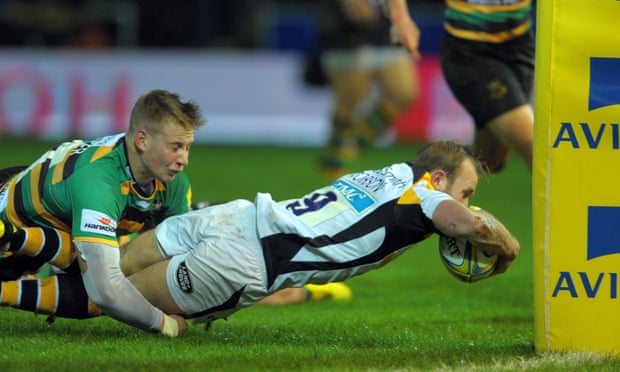 The score by Josh Bassett helped to make it 24-3 to the visitors at the break. Sam Dickinson racked up the corner for Northampton in the 2nd half, but Wasps now go above them in Premiership league table.

Both teams came into the game on the back of making it to the European Champions Cup quarter-finals. But Saints made seven changes for this game and they struggled to deal with the Wasps team who dealt with the wet conditions better to reach to 5th.

After Robson’s score, the away team raised their lead to 17-0 on twenty-five minutes when Miller put up Harry Mallinder’s challenge to cross.

Miller has been on the fringes of the England team for a few years now, and tries such as this will only help his cause to try to get into the squad for the Six Nations (England kick off against Scotland, click here for full details).

Jim Mallinder, the Northampton Saints director stated that the first half was unacceptable. Their defence was poor, they had no line speed whatsoever, they could not get their set-piece functioning at all, and therefore they gave their backs nothing to work from. He believes that they all looked flat as a team. It is time that they really have to have a look at themselves.

Dai Young, the Wasps director, said that he is very happy with the result. “They were excellent in the field, the team really came out of the block and they really deserve to win.”

After the match, Northampton Saints Tom Wood tweeted: “U can’t win every week but last night was a disaster. We’re ashamed of our performance. Well done to wasps. We really hav sum work to do now”